Gold coins (called "golds" and abbreviated "G" in the games) are the minted currency of most of the countries of Pangaea.

You can accumulate golds in the games by winning tournaments (most battles offer a cash prize for winning), selling items or monsters that you trained, or through some in-game events. You must use your golds to pay for food each week, buy training gadgets and upgrade your barn, and buy needed items. Some cities charge a fee for combining monsters at the Studio as well. In Monster Rancher Explorer, golds are simply another item to collect, giving you 1,000 game points.

Golds are seen/used quite a bit in the anime series, particularly where Hare is involved. He is always very concerned with money and often enters Monster Battles in order to win more. The currency seems to be interchangeable between countries and even continents, as The Searchers use it on Bubalook Island, Aurora Island, and the Northern Continent.

The price of weapons in MFL, listed in Golds 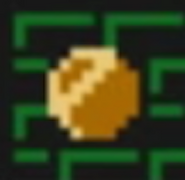 A gold coin in MR Explorer 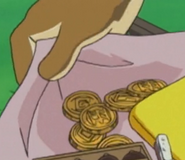 Hare's stash of golds in the anime series

Community content is available under CC-BY-SA unless otherwise noted.
Advertisement