This is about the anime character. For the monster itself, see Moo.

Master Moo is a Dragon monster, and the main antagonist of the Monster Rancher anime series. He is pure evil, and his soul has the ability to bring out the darkness in others. For most of the series, his soul is bonded to a human host to sustain itself, so he takes the form of a giant humanoid with dark fur and golden armor. His true body is much larger and looks like his counterpart from the video games.

As told by Monol, Moo was the ultimate genetically-engineered weapon in the great war of ancient times. His dark powers eventually grew too powerful for him to be controlled by his creators, and when he learned how strong he was, he stopped working for either side and began creating his own army with his ability to transform good monsters into his evil baddie servants. The surviving scientists called on a primordial creature capable of defeating Moo--the Phoenix. They battled, but proved to be too closely matched. Realizing that they had no other choice, the scientists used the unlocking technology in a way they never had before--to separate the minds of Moo and the Phoenix from their bodies. Moo's soul became locked in a Pandora Disc in his castle, along with the Mystery Discs of some of his most trusted troops.

Centuries later, Holly's father was banished from his village and went in search of the Phoenix without the aid of the Magic Stone. He eventually found Moo's castle, where he unintentionally unlocked Moo's soul. The malevolent spirit took over his body, creating a human/monster hybrid version of Moo. He took five new generals, calling them the Big Bad Four (and General Durahan) and began a conquest of the world once again. Some areas were completely taken over, and the humans and peaceful monsters there were either converted to his ways, killed, or made to be slaves. Each of his generals ruled a section of the continent he took over, while Durahan acted as a roving agent. Moo used his floating castle to travel in search of his ancient body, and after reclaiming the Magic Stone from Holly, was finally able to locate it.

Though he is mentioned several times in the first six episodes, Moo doesn't appear in person until the seventh episode, and in Episode 13 he easily defeats Tiger, Hare, Mocchi, Suezo, Golem and Genki, taking Holly captive. Through the combined efforts of the Searchers, the Pirate Dragons and a littler interference from Pixie, Holly and the Magic Stone are rescued, but not before Moo learns the location of his body. Moo flies to the North in his Castle and orders his minions to begin an excavation so that he can find it, but after uncovering it he realizes he cannot merge with it. Finally they find the machine that separated his body and soul and use it to fuse him back together. He begins to battle the Searchers, but when the sun comes up, he begins to burn and weaken. Only then does he realize he needs the Magic Stone again to complete his transformation.

By the time he has merged with his body, Pixie has switched sides and his three other lieutenants have been killed, so he sends General Durahan to do his work.

After Durahan's servants are defeated, he betrays Moo and takes the Magic Stone. Unfortunately the betrayal doesn't end there. Durahan's sidekick Lilim reveals she has been loyal to Moo all along, and tries to double cross him. Captain Weed ends up with the stone, who returns it to Moo, while Lilim and Durahan go down in his burning ship.

Moo perfects his body and then turns his attention to destroying the Searchers, mortally wounding Pixie in the process. But unfortunately, he realizes he has absorbed too much hate over the years and it drives him insane. He rampages, destroying everything including his castle and his troops. Genki is able to use his courage to summon the Phoenix, which then fights Moo. They destroy each other, exploding in a huge ball of light.

Though his body was destroyed, Moo's soul and Holly's father's body become sealed inside a disc together. When Genki returns to the monster world, Holly and Mocchi meet up with him and tell him about the disc. After reassembling the old gang, the crew decided to find a shrine and free Holly's father, and very nearly release Moo in the process. However, Durahan (who survived his crash) was searching for the disc so he could absorb Moo's soul and use its power as his own. His followers eventually ambush the gang and steal the disc, along with the Magic Stone.Though he succeeds in his plan, Moo turns out to be too powerful and takes over Durahan completely, also absorbing his henchmen to become a massive Ruby Knight.

Even though the Searchers fight valiantly, they have no effect on Ruby Knight until Holly's father interferes. He regains his memory of his years being tormented by that soul, and shows Durahan how to overcome the darkness. Genki, Holly, Holly's father, Durahan, Poison, Mum Mew, Gobi, and Weed merge with the Phoenix, empowering him to charge into Moo and destroy him forever.

The events of the Moo's destruction are mentioned during Monster Rancher EVO, when it becomes clear that the people of the Warp Dimension are performing experiments with his DNA. They steal the artifact originally intended to control him--an Anima Recorder called Moo's Horn--and use it to create a cybernetically enhanced clone of him. They then set it loose on your character and you must defeat him as the final level boss.

Moo later resurfaces as the main villain of the Monster Farm Lagoon series. His soul once again latches onto the life force of several other beings (mostly monsters this time) and uses them to recreate his Dragon body. The tremendous amount of energy released when this begins is believed to have caused the tsunami that destroyed much of the Eastern Continent. Throughout the game you must face not only Moo-infested monsters, but Moo himself in his varying stages of development. Ultimately, his Dragon form is the final level boss.

Moo also makes a brief appearance in Monster Rancher Battle Card: Episode 2. A legend states that the breeder who collects all of the monster cards will gain the aid of the "ultimate monster." Once you have done this, lightning flashes at your farm and Moo's voice can be heard. His card will now appear in your deck. 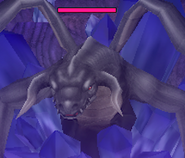 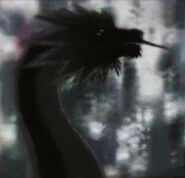 Moo's "Larval Form" as seen in the anime

The citizens of Warp create an upgraded body for Moo, his "Warp Form" 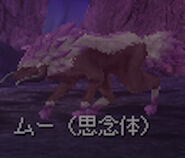 Moo merges with a Tiger in MFL for his "Tiger Form" 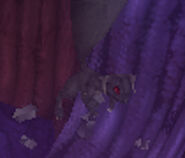 Moo merges with a Kikimo in MFL for his "Kikimo Form" 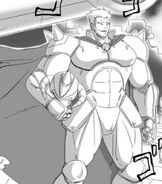 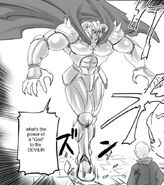 Master Moo in human form, as seen in the manga
Community content is available under CC-BY-SA unless otherwise noted.
Advertisement