The story of Monster Rancher 2 is largely non-linear with story events happening only after certain requirements are met (winning a battle, reaching a certain rank, etc.) The story begins with the main character going to register to become a trainer, it is there when Colt appears as the trainer's new official assistant. The "end" of the game is when a monster is able to beat the Big Four (the four highest ranked battles in the game) when this happens a video about the history of the monsters is shown. A monster who has beaten all four of the S class tournaments can then go on to compete in a special match for champion monsters like itself.

It is important to note that Monster Rancher 2 happens in close time proximity to Monster Rancher 1, but on a different continent (MR2 being set in the IMA area, and MR1 set in the FIMBA area), because of this there is a special battle between the player and the assistant from the first game, Holly. This event takes place every four years, much like the Summer or Winter Olympics, and the player's monster has to be of certain rank to gain entry to. Additionally, the event is called the IMA vs. FIMBA meet and always takes place in the last week of August. The player must win the preceding entry tournament first, which always takes place in the last week of July, respectively.

Understand, though, that defeating the Major 4 tournaments and the Legend Cup, does not unlock all of the monsters in the game. There are different steps to take to unlock each main breed monster in the game.

This game involves raising, fighting, and breeding monsters. The main character is never seen on screen and never talks to anyone directly. Instead, all of the dialog and action is done by the trainer's assistant Colt and her toucan Joy. The player chooses his actions and choices through menu options.

Under certain rare circumstances, your monster may bring back a special combination item after going on errantry.

Besides the monster types you can unlock from the beginning, there are many more which you can raise. There are three different ways in which to unlock new monster types for raising: plot events, expedition, and errantry. The most common way these new monsters are given to you is by the gain of an item, which when used to combine monsters, will produce this new type. After that happens, CDs will now be allowed to produce monsters of that type. During the course of the game, certain events may happen which allow you to raise new monster types. Most of these happen when specific requirements are met, although a few seem mostly random.

The way you make money, and gain ranks, is by having your monster fight in tournaments. In a fight, your monster starts with 50 guts, which is basically energy to spend on the moves they know. You can control the monster yourself, or let them fight on their own as they do when they get into a battle in the wild.

Moves can be done in one of four ranges. You move forward or backward by pressing right or left. If you get in very close, you can also push the opponent away from you.

There are three different expeditions in the game that can lead to gaining new monsters and obtaining very rare and helpful items.

This game contains 38 main monster breeds, some of which can be combined to form new monsters. For a full list, see Monster Rancher 2 Encyclopedia. 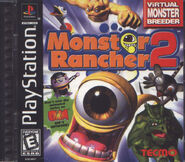 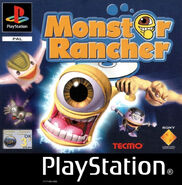 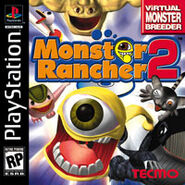