This is about the anime character. For the monster itself, see Phoenix.

Phoenixes are already powerful enough, but the wisdom and power of the Phoenix from the anime series surpasses all others. More than likely, this Phoenix is Suzaku, the legendary Phoenix lord who has been mentioned in legends all over Pangaea for thousands of years.

Dawn of The Era

Legend states that early on in Pagaea's history, before the the Dark Times started, there was a powerful firebird called the Cinder Bird who lived somewhere in Brillia. It was known to show up in times of trouble to help stop powerful monsters who were out of control. The Jills called on it for help when one of their kind became cursed and went on a killing spree. The Cinder Bird came to them and showed the evil Jill the kindness in its heart, turning the Jill good once again and igniting the bird. Many believe that each time the Cinder Bird would help someone, it would burn brighter and longer (Jill tells the Searchers this story in Episode 46).

Another legend says that a mortal king called upon Suzaku to save his ailing daughter. She had a peculiar talent--the ability to communicate telepathically with monsters. Suzaku saw fit to heal the girl using his blood, but made the king promise that if he ever needed her help, the princess would be at his disposal.

Coming of The Dark Lord

Not too long after, a powerful monster calling himself the Dark Lord tried to rise to power using humans' technological modifications on monsters. This was Xevion, who hundreds of years later tried to rise again. What he hadn't counted on was that Suzaku chose this time to call in his favor from the mortal princess. Together, they raised an army of monsters and humans that opposed Xevion and sealed him in a disc (This story is revealed in Monster Rancher 4).

Unfortunately, this showed humans the capability of using monsters not just as pets, but as weapons of war. Seeing his error in bringing humans into the monsters' quarrel, Suzaku approached the king about his daughter's safety. Together they agreed, and Suzaku sealed the princess inside a mystery disc and hid it away to keep her safe. This disc was found hundreds of years later by a young Shrine master named Cesare, who unlocked it and raised the girl as his daughter, Rio. Unfortunately, nothing could prevent the natural disasters that occurred around the world, creating tension between the existing clans.

Soon, the humans and monsters began fighting territory wars against each other, and it escalated so much that the Pendant civilization began creating more powerful monsters to use as weapons. Moo was their last and most powerful attempt, but he proved to be too much for them. Instead of fighting for their side, he began amassing his own army, using the monsters' hatred for their captors to fuel his cause. Knowing that Suzaku was their only hope, the scientists begged for his help and the Phoenix lord agreed. He allowed them to modify him for the battle, making him a beacon for the Final Gate to latch onto. The Phoenix faced Moo in combat, long enough for the scientists to separate Moo's mind from his body. Unfortunately, that meant that the same happened to Suzaku, and because he was the beacon, his soul recieved the most damage, being split into five pieces. It was believed that the five pieces of the Phoenix's soul fell from the sky and embedded themselves in five mystery discs, which later were revealed as Mocchi (the Phoenix's courage), Suezo (Phoenix's pride), Golem (Phoenix's kindness), Tiger (the Phoenix's anger), and Hare (Phoenix's intelligence). They fuse together into the Phoenix 's frozen body to bring it back to life.

But even for this, the Phoenix had a plan. Even though the king from long ago had fallen in the battle against Moo, Suzaku entrusted his descendants with several magical relics called Gaea Stones that would allow them to reunite the pieces of his soul if he was ever again needed. One of these descendants was Holly, who listens to the legends of her people and follows one of the stones throughout the anime series on a quest to revive the Phoenix to stop Moo's new reign of terror. She is finally able to reunite the pieces of the Phoenix, and finds its body frozen in a glacier in Brillia. Using Genki's courage, they ignite the legend once again and battle Moo until their bodies burn up and their souls revert to their previous forms.

After the battle, the Phoenix's essence continued to live inside the five monsters, until it was used to destroy Moo's soul at the end of the anime series. Holly believed that Suzaku's essence was burned up in the battle, but true to form Suzaku rose once again during the events of Monster Rancher 4, being summoned by Rio to help prevent Xevion's return.

The fiery "Lord of the Skies," whose eyes spark with wisdom and whose wings contain the power of fire. Only the one who is pure of heart shall be blessed by the lord's power.
-"Spark Flute" MR4 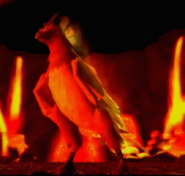