Worm is a massive monster that can dig underground. Several Worms appear in the anime series.

The Searchers first encounter a Worm in Episode 4, when Allan uses his gigantic pet to attack them and steal a mystery disc they have found. Allan is a terrible master to his Worm, and even though the monster is larger than an elephant, it loves the boy so much that it never retaliates when he yells at it, calls it names, or beats it.

Genki tries to stop Allan from hurting the Worm, but Allan is convinced that they should join the Baddies....until the Seed Sisters double cross him and tie him up. They offer Worm the chance to leave his unkind master, but when Worm decides to release him instead the Seed Sisters drain the life out of him, turning him into a lost disc.

Allan is devastated, but when the Searchers unlock the mystery disc they found, it turns out to be another baby Worm. They leave it in Allan's care, making him promise to treat this one with love and respect.

Allan later raises the small Worm to be a good fighter, and together they are seen fighting the Baddie at the end of Season 2.

Genki runs into Allan again in Season 3. After Moo was destroyed, Allan went back to where his old Worm had died and unlocked it again. Now he and his two Worms travel around finding mystery discs and giving the monsters inside them good homes.

Worms are seen many times in the series, sometimes helping in the countryside villages or sometimes making their way through the cities. Moo also has a small force of Worms that live inside his floating castle and attack the Searchers when they try to rescue Holly. 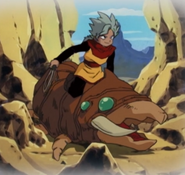